Hares: Weapon of Ass Destruction and Just Nina on her Virgin lay.
RA: Asphalt Liquor.
Scribe: Just Begging for It

This bank holiday Hash was planned like many Summer Hashes before it with the Hares having great expectations of beautiful sunny weather and cold plentiful beer. Alas, the mischievous Hash Gods had a different plan in mind for this Thursday Hash and soaked the trail and the hares in torrential rain whilst flour was being laid. Also, the sudden surge in late sign ups was likely to result in the unthinkable becoming reality – that the Hash may not have enough beer to satisfy the thirst of the many beer guzzling Hashers.

END_OF_DOCUMENT_TOKEN_TO_BE_REPLACED

Regular 5 CHF hash cash for the run,  30 CHF for Thanksgiving dinner (5 CHF for kids under 12; kids over 12 will be charged full price and given small beer).

Let us know if you are coming and what you are bringing by signing-up on this form. Please bring food! 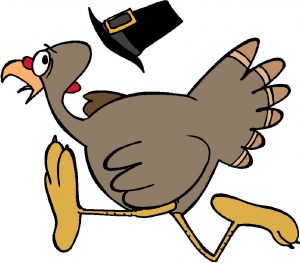 (Yes, this is the same graphic as last year.)

Let us know if you are coming and what you are bringing by signing-up on this form. Please bring food!

Please if possible pay in advance

(Yes, this is the same graphic as last year.)

This is not so much a story of the hash, but of the build-up, the delivery, the smuggling, the kiddy scaring, the cooking, the acrobatic carving, and the many occurrences surrounding the hash itself!

It wasn’t your average, Ho-hum run of the mill hash. I want to Mention ROUSs but I don’t think they exist!

Where to begin? The hash was aptly named ‘Spit roast hash’ due to the cooking method employed to prepare the sacrificial offering. How was this obtained? The Piggy was smuggled across the border under the cover of darkness by one of the co-hares Papa F.K.K.

Once delivered to a secret location on the outskirts of Zürich, off-spring units were informed of the delivery of said Piggy. This news was met with much squealing (not by the piggy) and excitement by the offspring units. A short lived event as the kids were introduced to the dressed, albeit eyeless piggy in the boot of the car. Where she/he lay until the early morning. The sex of the ‘It was bought in a Cash deal’ Piggy was not discussed between the smuggler and the providing abattoir, and was only discussed in and around the fire pit.

The Piggy was moved ‘to location’ in the early hours for a slow roasting. 0700 was discussed. The fire was set, and the slowly rotating piggy was guarded for the forthcoming 7-8 hours by Just Joe with further support from Stogie Gibberish. Any romantic visions of slaves standing fireside will unfortunately have to disappear as the electric rotisserie was powered by a car battery, provided by Slippery Digit. (Who had to carry the car battery home, when nobody was sober! No good deed goes unpunished!)

Fast forward to the early afternoon: Several Virgins attended, one of whom came from Liechtenstein as “There is nothing to do there and I have had to travel 2 hours to get here”. 2 others that ran too much, but more on them later. And another local guy with a big beautiful dog.

More than a few regular hashers also arrived with side dishes in hand. Our GM, Asphalt Licker, brought home made red cabbage. Many salads were also provided. Scribe never saw who brought what so cannot name. There were 2 fantastic cakes. In the words of Cheesy Balls, the walnut cake, prepared by Sticky Fingers was, “Dreadful … As I only got one piece!”

So on to the hash itself. Most noticeable in the chalk talk was the over emphasized ‘Boar & Piglet’ split. The extra-long Boar section when compared to the super short Piglet turned out to be about 60m different in length. I guess that the hares have to amuse themselves somehow.

The weather forecast was dreadful … but wrong. Fantastic weather. Scribe did about 10Km. Two of the virgins did +14Km, came in 1st etc. Enjoyed it and said they would be back. Some previously used trail, but plenty of virgin territory …

At the circle and On-In. The hashers arrived to a table full of food, Piggy slow roasting, and circle. Impatient hashers continually distracted wanting to be fed.

Not in circle but a noticeable performance by Climbidia for bearing down on Piggy, with carving knives in hand. I am sure that straddling Piggy from above was not necessary, but it looked good.

All hashers finally left with very happy, with full bellies, and plenty of leftovers.

Editors Note – Think you can do better? Volunteer to do the next write-up. Please send leftovers, an Uber for Slippery Digit, and more walnut cake to ZH3.com.